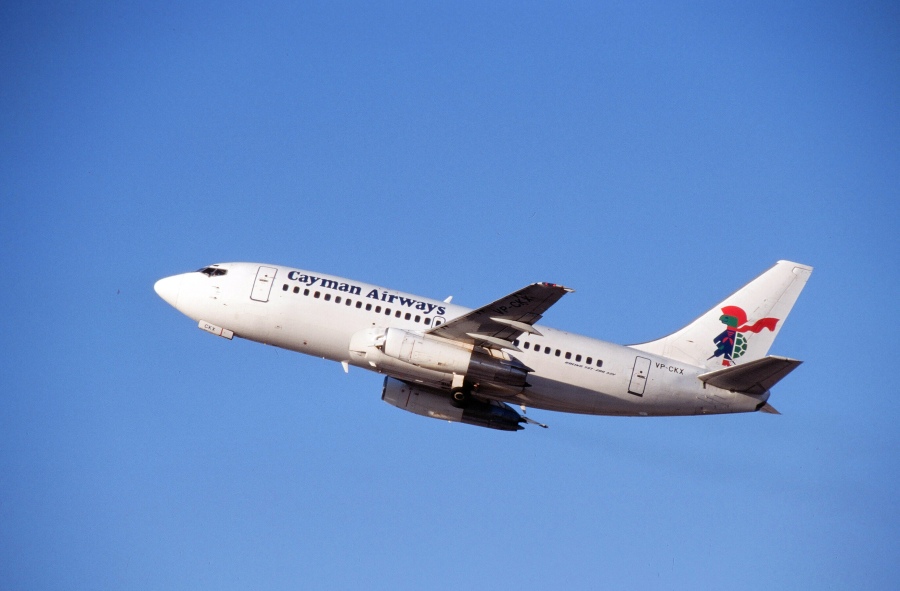 In the race to develop a short-range, medium-size jet airliner, Boeing was definitely second out of the starting gate, a full two years behind the Douglas DC-9. Initial sales of the 737 lagged behind the DC-9 and an initial snapshot of the two competitors would have suggested that Douglas was going to be the clear winner in that race.

It’s been nearly 52 years since the first 737 took flight and it’s probably safe to say that nobody back then could have predicted that the 737 would morph from its initial role as a short-haul airliner into an airplane that would be used routinely from the West Coast of the US to Hawaii, or from the East Coast to Europe, or that it would smash all production records for a jet airliner and would remain in production for well over 50 years with no sign of slowing down. According to Wikipedia, the DC-9/MD-80 remained in production for some 27 years, with a total of approximately 2100 airframes of all types built. Today, nearly 11,000 737s have rolled off Boeing’s production lines, with nearly 4,700 additional orders. The nearest competitor to the 737 is built by a company that was not even existence when the first 737 was delivered – the Airbus A320 family.

As I scanned a selection of slides recently, I found myself gravitating toward the “737 Classics”, which includes the -100 through -500. I have a soft spot in my heart for the 737-200. When I was hired by Piedmont Airlines in 1981, we were still taking delivery of brand new 737-200s. Later, Piedmont was an early customer of the 737-300, an upgraded model equipped with ultra high-bypass CFM-56 engines, Later, Piedmont was the launch customer for the longer 737-400. In fact, at one point, Piedmont operated the world’s largest fleet of 737s.

So without further delay, here is a collection of photos of Boeing 737-200s from around the world.

9Y-TJG is a 737-2Q8 of Air Caribbean, seen in Miami in January 2000. This airframe was delivered to GECAS Leasing and has been registered in no fewer than eight countries! 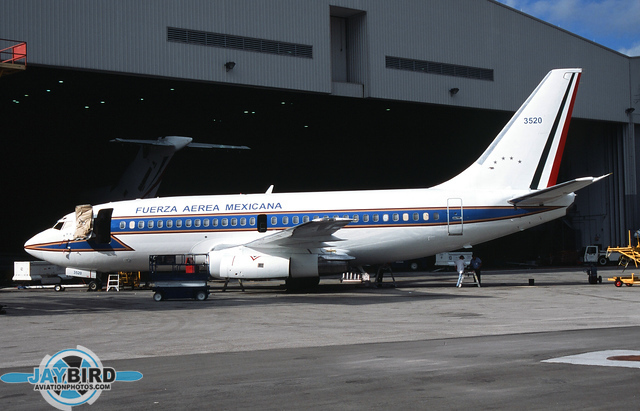 3520 is a former USAir 737-2B7. One of the benefits of working at Miami Airport from 1999 until 2006 was my ability to record airplanes arriving at MIA in one color scheme, and departing in quite another. Such was the case when N286AU arrived at Miami on its final flight in US Airways Metrojet colors. Within a couple of weeks, it was sitting outside the hangars of Commercial Jet, wearing the colors of Fuerza Aerea Mexicana.

It’s hard to imagine that C-GCPW represents the humble beginning of the company that has arguably grown into the world’s largest airline. This 737-275 is one of four aircraft that America West Airlines leased from Pacific Western Airlines to start up service. World’s largest airline? Don’t forget that in 2005, America West bought US Airways, which was in bankruptcy at the time. Doug Parker, CEO of America West, decided that the name US Airways, carried a better brand recognition than did America West. So, the resulting airline was christened US Airways, although it was really America West in disguise. Fast forward some ten years and Parker engineered the purchase of American Airlines while it was in bankruptcy. Same page out of the same playbook and although US Airways bought American, and the surviving airline was named American, while retaining much of the America West management.

C-GSPW is a 737-275C, another Pacific Western aircraft. It is seen here on short final to Vancouver in October 1988, soon after several airlines merged to create Canadian Airlines. C-GSPW remains active today, in service with Air Inuit.

Lufthansa was the first European operator of the 737 and was one of only a handful of airlines that operated all five versions of the 737 Classic. D-ABFU was one of a handful of Lufthansa 737-200s to be fitted with Nordam Hush Kits. This 737-230 was transferred to the Lufthansa Express division for a couple of years before being sold to Ryanair. This photo was taken at Zurich. 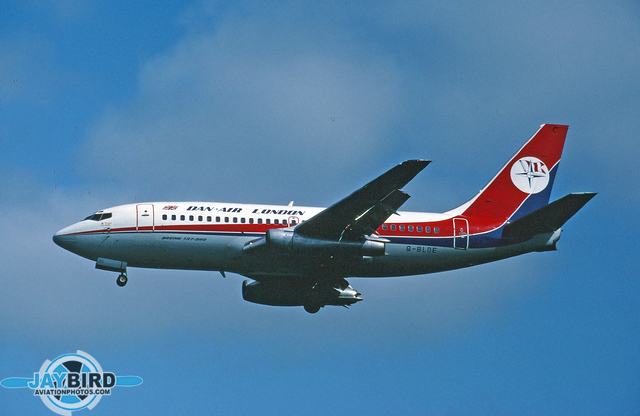 G-BLDE was a Dan-Air London 737-2E7, originally delivered to Arkia Airlines. It is seen here on final approach to London Gatwick Airport in May 1992 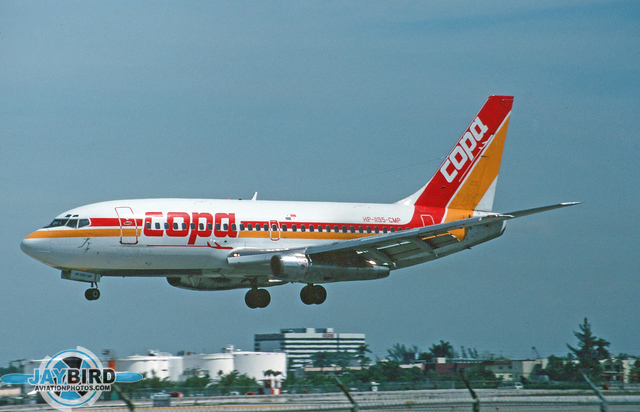 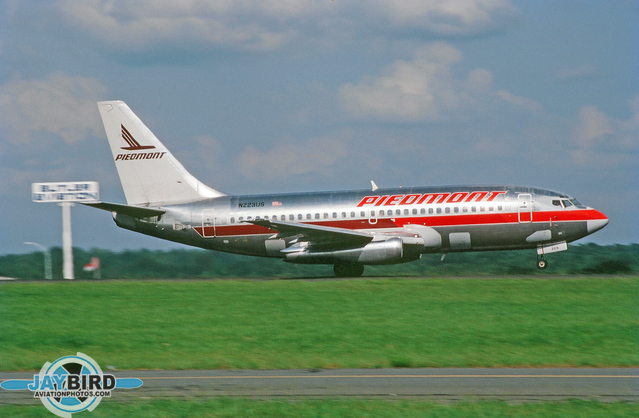 N233US was one of two Piedmont 737-201s to be repainted in the red transition colors just ahead of the merger with US Airways. It is seen here lifting off from Runway 18L at Charlotte in September 1989. 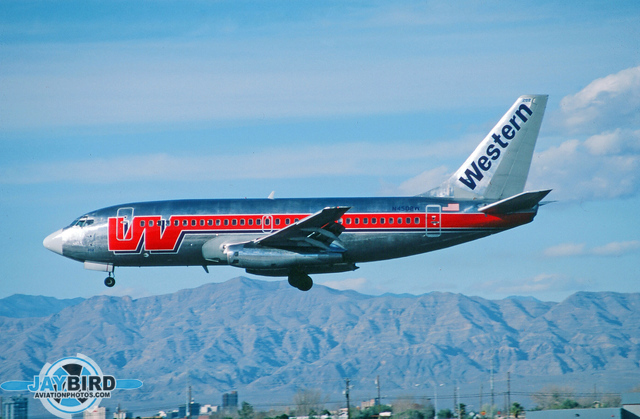 N4502W is another Western Airlines 737-247 landing at Las Vegas. This plane is wearing Western’s final color scheme, in the day when many airlines stripped off the base coat of paint in the name of saving weight. Personally, I’m glad THAT song left the top ten! 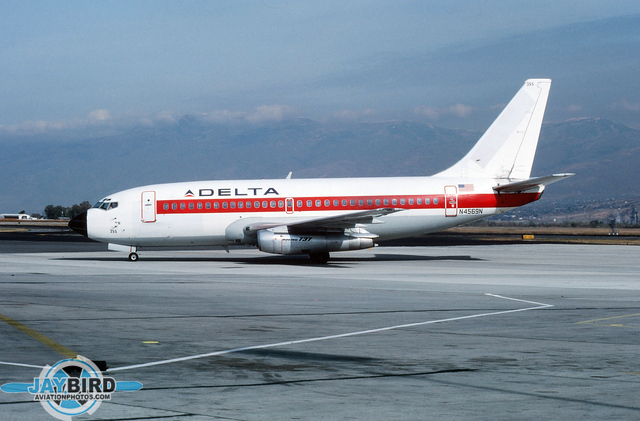 N4569N was a 737-2T4 originally ordered by Air Florida, but it was actually delivered to Alaska-based Markair. It was later bought by Western Airlines. After Western was bought by Delta Airlines, most of the planes remained in basic Western colors.

N242WA was another 737-247 originally delivered to Western. It was later transferred to Delta. It is seen landing at Las Vegas. 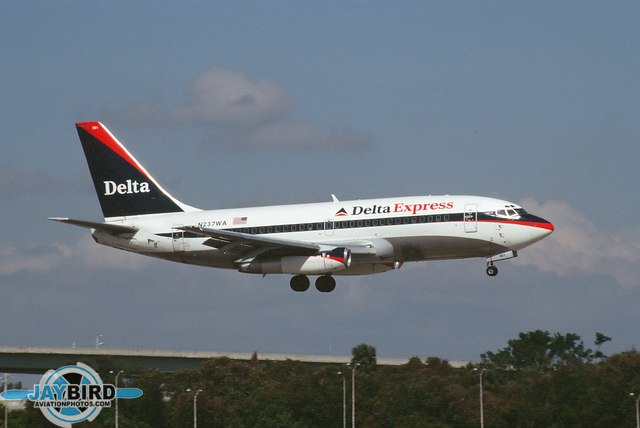 N237WA is one more 737-247 that was delivered to Western, then transferred to Delta as a result of the merger. Its final role for Delta was operating as Delta Express. This photo was taken at Ft. Lauderdale in February 2000. 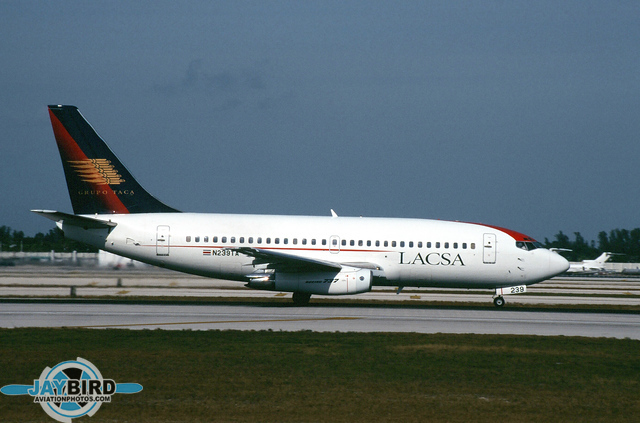 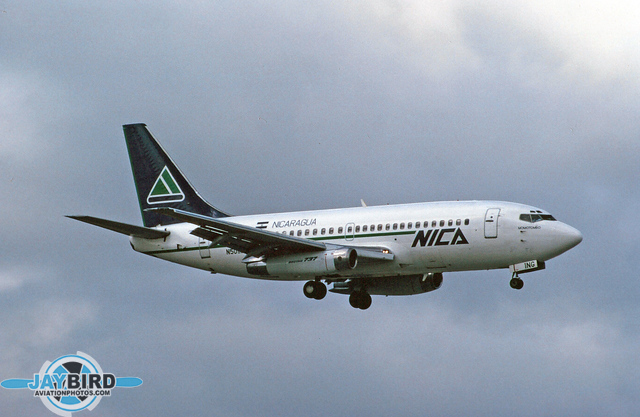 Nica was a short-lived airline that flew 737s into Miami. N501NG is a 737-2T5 that was delivered to Orion Airways 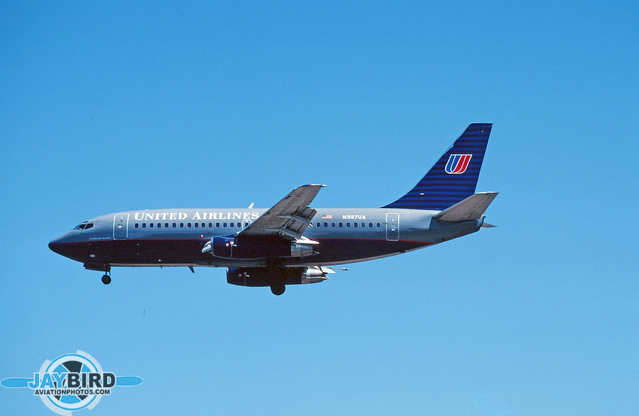 When Frontier began having financial difficulties, the company was forced to sell off a number of its aircraft, including 737-291 N7354F, to United Airlines, which reregistered it as N997UA. This was photographed at Denver Stapleton in June 94. 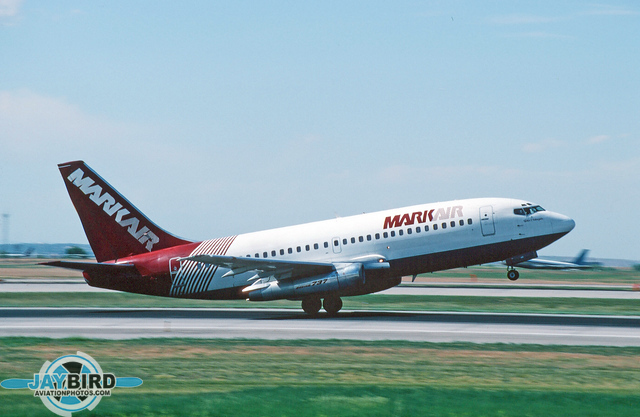 In its final months, Markair attempted to break out of its traditional service area in Alaska, and established a mini-hub at Denver Stapleton. N685MA is a 737-25A which was originally delivered to Midway.

N4951W is a Wien 737-210C, which I photographed on my first trip to Anchorage in October 1995. The following year, the airline had gone out of business. 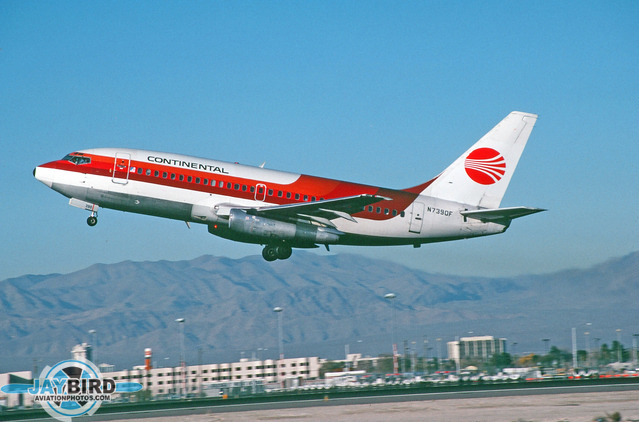 After failing Frontier Airlines was purchased by Continental, it was a common sight to see planes like N7390F, a 737-222, flying in Frontier colors with Continental titles. This was taken at Las Vegas. 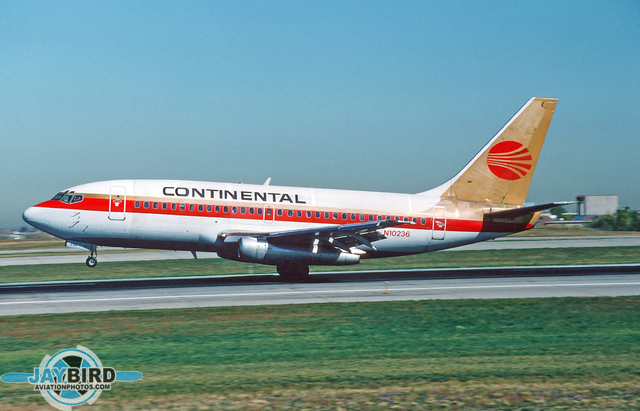 Here is another 737-222 that came to Continental by way of United and Frontier. N10236 is seen touching down at Stapleton in full Continental colors. 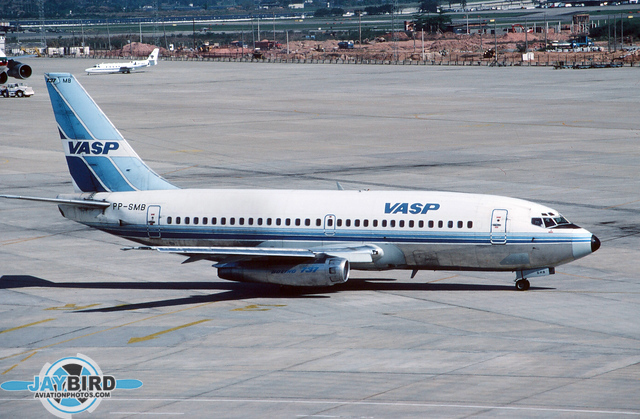 My first visit to Brazil in October 1986 was quite an exciting trip, with lots of new subjects to photograph. GIG had a lovely viewing terrace and I had a terrific view of a number of Brazilian 737s such as PP-SMB, a VASP 737-2A1(F) 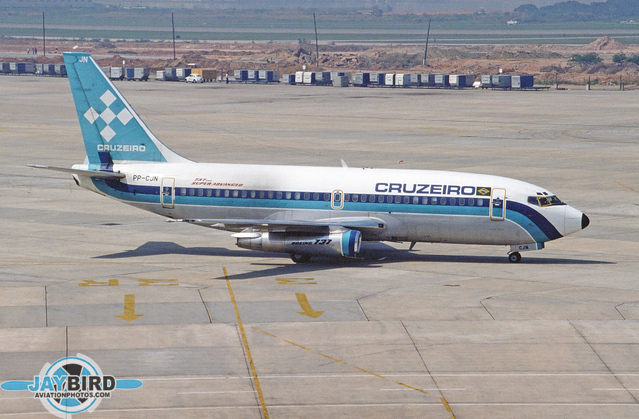 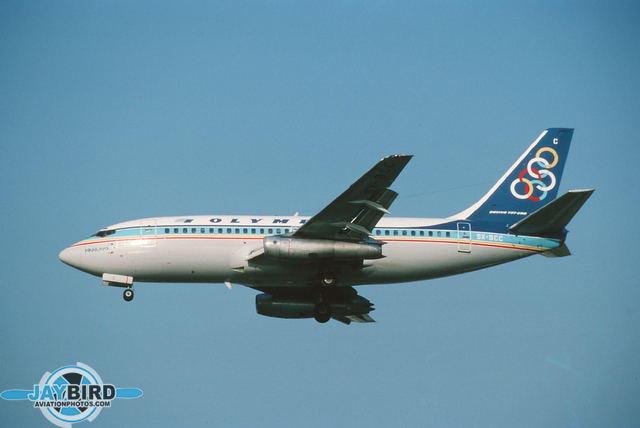 On by one, the greatest airports in the world for photography were replaced by newer, more modern, and more sterile and photo-unfriendly airports. One of the best was Hellinikon Athens Airport, along with the wwll-known Hotel Emmentina. What wonderful memories. Here is an Olympic 737-284. Sadly, both the airport and the airline are now gone. 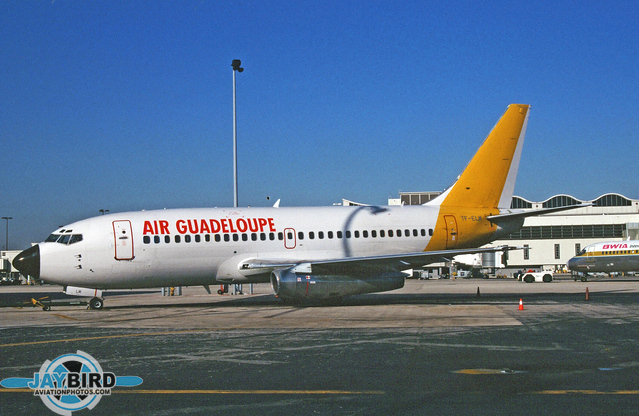 TF-ELM, 737-2M8 flew under many different identities during its lifetime. Its last identity, however, made it somewhat unique. Owned by Air Caraibes, it flew with Air Martinique titles on the starboard side, and Air Guadeloupe titles on the port side, as seed at Miami Airport.