Saturday, July 28, 2018, was Day 6 of AirVenture, and, in some ways, the most important photo shoot of the event for me. The seeds of this mission were sown when I was at the Great Lakes/Howell Formation clinic two weeks prior. I got to talking with Dan Schiffer, the only check pilot at the event and one of the very few in his region. Dan brought his T-34 to Howell, but somehow I managed to not take a single photo of it. When he ever so delicately pointed that out to me, I offered to photograph it if he brought it to Oshkosh. He responded, “I’m not bringing the T-34 to Oshkosh. I’m bringing the Corsair.” Of course, I HAD to respond, “Okay, I’ll be very happy to photograph the Corsair!”

That was the genesis of an idea that evolved into our photo shoot of Saturday morning. Just one week before AirVenture 2017, Vlado Lenoch, a talented and widely-admired warbird pilot, was killed in the crash of a P-51D. Schiffer and Lenoch had been good friends, and Vlado often flew the Corsair that is owned, in part, by the Schiffer family. Additionally, earlier this year, the Warbird Heritage Foundation acquired Lenoch’s old P-51D, “Moonbeam McSwine”, with the intention of flying it in memory of Lenoch under the new registration N51VL. So, Dan Schiffer suggested putting together a flight consisting of the Corsair and Mustang in Lenoch’s honor.

Needless to say, I certainly didn’t have the horsepower to organize such a high-profile flight, but Dan did. He spoke with his cousin Michael Schiffer about flying the Corsair, and then recruited Fred Bower to fly the Mustang. Ron Staley was scheduled to fly his L-39 as the photo ship. But with a grandchild due any minute, he suggested Mike Terfehr as a replacement. I’d flown with “Spanky” earlier in the week and was delighted that I was going to be flying with him again. As we began our briefing on Friday evening, Bill Culberson asked if he could join in with his MiG 17. I certainly wasn’t going to say “No” to the chance to take photos of his freshly painted MiG! One last question remained…what our call sign would be. I suggested “Vlado Flight”, and that settled that question. 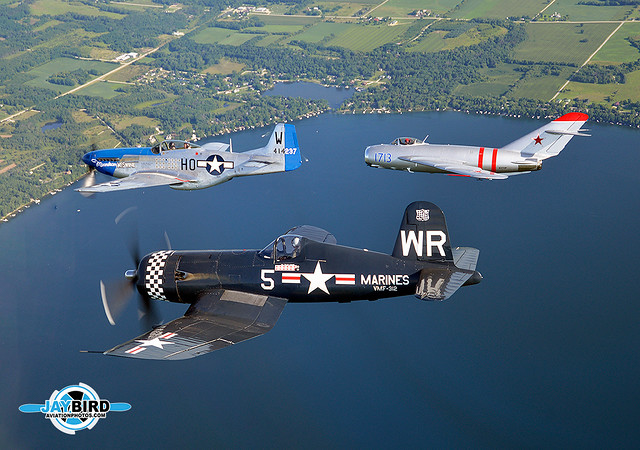 I’m going to be honest. I had a mixture of nervousness and excitement that night, and didn’t get a lot of sleep. Vlado was one of the first warbird pilots I’d friended on Facebook and, God bless him, he always had time to say hello when I’d hit him up with a chat request. I finally had the pleasure of meeting him in Peru IL last year, less than two months before his untimely death. He was universally liked, admired, and respected, and his death sent shock waves through the warbird community. This flight was going to be a big deal…so big, in fact, that I understand Dan was trying to arrange for Vlado’s son Michael, a US Air Force pilot, to come to Oshkosh to fly in the back seat of Moonbeam. That, unfortunately, didn’t happen.

Before I knew it, Saturday morning had arrived, and we were off to the races. A lot of spectators at AirVenture listen to airband radios to hear what’s going on, myself included. As “Vlado Flight” echoed on radios around the airport, the very name caught the attention of a lot of people. The sight of a Corsair, Mustang, MiG 17, and L-39 certainly got the attention of others. By the time we’d taken position on the runway, I could feel a lot of eyes watching us.

As he did before, Spanky did a masterful job of organizing the flight through various formations and angles. He made my job fairly easy as he lined up the formation, then eased us into position. The only fly in the ointment was that Mike Schiffer in the Corsair lost all radio communication with us. Ever the professional, he stayed glued to the wing of Moonbean. That cut down some of our maneuvering options, but he did allow us to complete the mission. 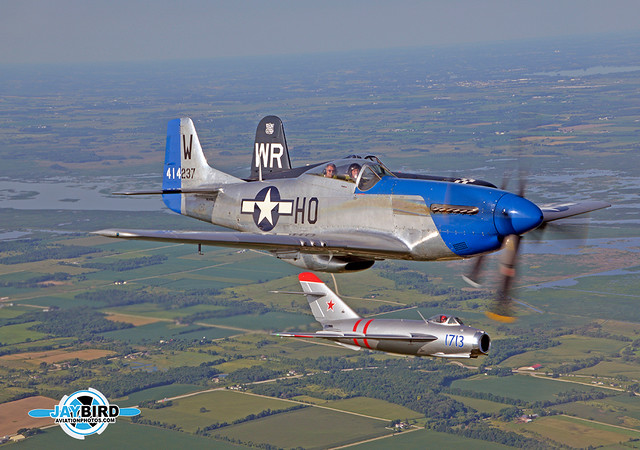 We took plenty of photos of all three aircraft, then we got the MiG to back off so we could capture shots of just the Corsair and Mustang. Then we took some individual aircraft portraits. We wanted to get some shots of the MiG in afterburner, but it took two tries to realize that Culberson started accelerating well before the flame began to shoot out of the tailpipe. On the third try, he started off well behind us so I could catch the flame as he passed by. Man, he was really humming as he passed us, but I did get off a couple of pretty good shots. 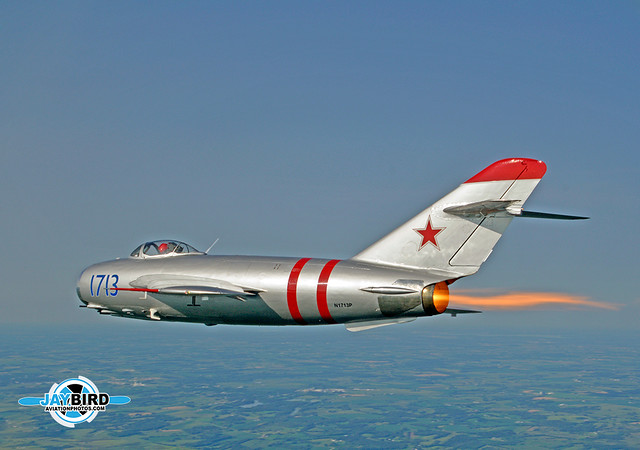 We were probably up there close to an hour, and it was probably about the most exciting hour of photography I’ve had since I joined the warbird community. I felt pretty good about the photos, but it wasn’t until I looked at them on my laptop that I heaved a sigh of relief! Many thanks to everyone involved, especially Dan Schiffer, for having the vision as well as the wherewithal to get the right people on board. Also, kudos to Mike Terfehr, who is one of the best photo ship pilots I’ve ever flown with. Taking these photos as a tribute to the memory of Vlado Lenoch was truly a team effort, and I was blessed to be one part of a terrific team. Thanks again to Mike Schiffer, Fred Bower, and Bill Culberson. 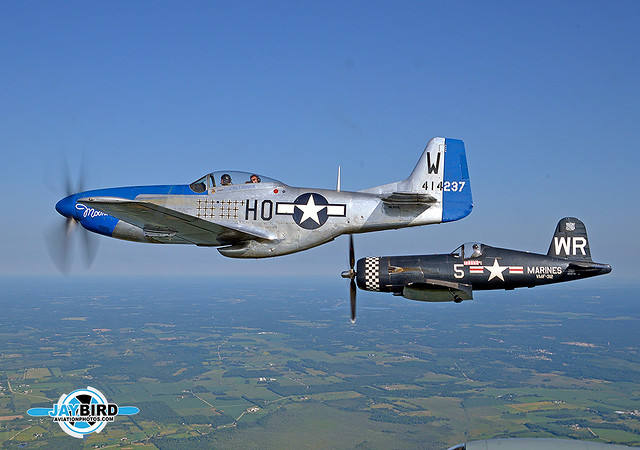 This year, EAA Warbird President Connie Bowlin and Paul Wood dedicated the Warbird Youth Center building in Lenoch’s memory. This building houses the P-51 Mustang and Corsair Flight Simulators. I am proud to say that one of my photos will eventually be displayed in this building. It is an honor.