Friday, July 27, 2018, was Day 5 of AirVenture, and was a “just for fun” sort of flight. When I posted a few of Sunday’s “pre-show” photos on Facebook, I got a note from Kevin Kearney that one of the planes I got shots of was a PT-26 belonging to Mark Howard. I’d met both Kevin and Mark through my photo shoot of the Berlin Airlift C-97. So…I was shortly on the phone with Mark to say hello and see if we could arrange for a little photo shoot of his PT-26.

In that same vein, I gave Hunter Reilly a shout to see if he was up for a flight. Hunter flies a BT-13, and I met him at Oshkosh last year, after previously friending both Hunter and his dad, Jeremy. We had a good photo shoot last year, but we were both happy for another opportunity. So, a plan was formed. 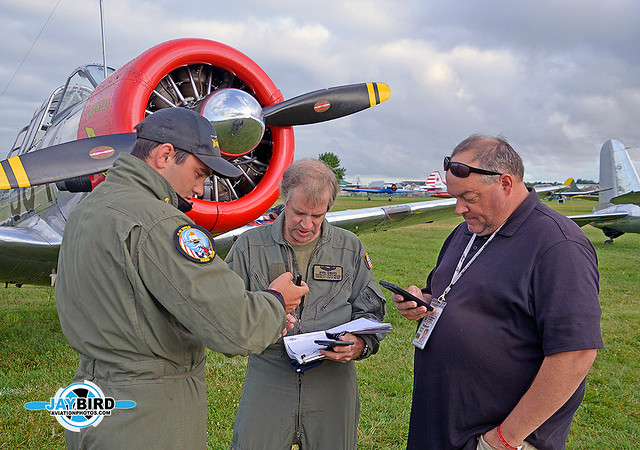 Hunter Reilly (L), Mark Howard (C), and Mark Phillips (R) go over the briefing items prior to our flight. 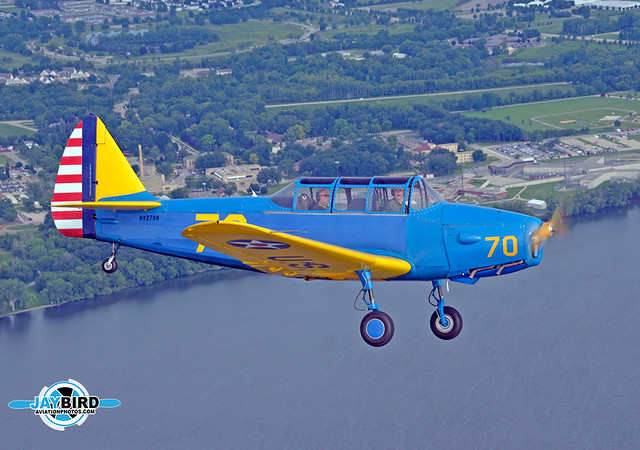 Our arrival at ATW was routine, despite the higher-than usual traffic. This airport s typically a reliever airport for OSH and gets a lot of overflow from AirVenture. In fact, on the Saturday preceding AirVenture, when OSH was IFR only, a LOT of traffic diverted to ATW. So our arrival was not a stress on the tower and then professionally handled us in the air and on the ground.

After we played “Musical Airplanes”, we departed ATW and headed back over Lake Winnebago to take photos of Hunter’s BT-13. Then it was time to join the furball of arrivals at OSH. I constantly marvel as the professionalism of the controllers at OSH which is, for one week, the busiest airport in the world. They safely and efficiently handle nearly 20,000 operations during AirVenture. Due to the difference in airspeeds, we parted company, leaving Hunter to fly the Warbird Arrival, while we headed south to follow the railroadd tracks leading to a VFR arrival to Runway 27. Our landing was routine, and we taxied back to Warbird Parking. It was another successful photo mission.

After these flights, I took time to seek out Mike “Blade” Filucci, one of the big movers and shakers in the Warbird Community. Blade, currently the Vice President of Flight Operations and Pilot Information Center at Aircraft Owners and Pilots Association, was the first President of what is now the Redstar Pilot’s Association.

He says, “In 1997, the Yak Pilots Club was a small and struggling association of pilots flying primarily Yak-52s. It was in critical enough shape that it was in danger of losing its accreditation under the Formation And Safety Training (F.A.S.T). I had recently bought a Nanchang CJ-6 so I was interested in growing the association beyond its boundaries. Along with two partners, we basically bought the assets of the Yak Flying Club and renamed it the Yak Flying Association, later renamed Redstar Pilots Association (RPA).” Blade was the Association’s first President.

When I caught up with Blade, he was showing John Shuttleworth his new airplane, a SOCATA TB30 Epsilon, a French built light military trainer. It sports a Lycoming O-540 flat-six piston engine. He says, “The performance of the Epsilon makes It a terrific formation aircraft. The controls are extremely responsive, and the engine produces plenty of power. Having said that, I will always be an RPA’er at heart.”

While we were chatting, current RPA President Hartley “Postal” Postlethwaite came by to visit. It was a terrific photo op.

After visiting with these gentlemen, I took some time to catch my breath and watch some of the air show from Warbird Parking. 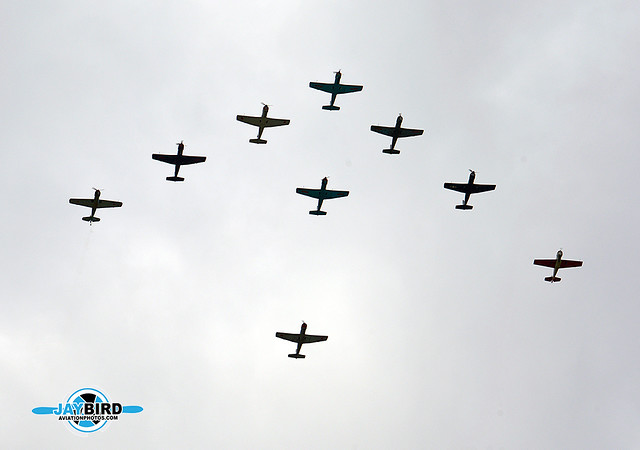 I was particularly pleased to see my RPA Comrades fly a couple of extremely tight formations.

All in all, Friday was a good day to catch up with some people I’d wanted to see, and still take some pretty good photos. At the end of the day, I met with a special group of pilots to brief a very special flight for Saturday morning. More on that in the next blog installment.