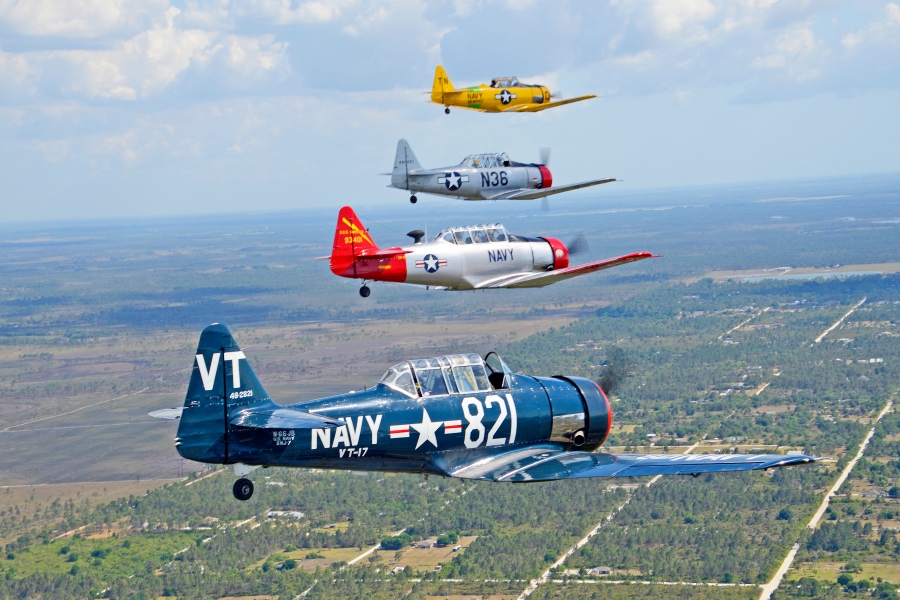 April 6 was the sort of days I dream of at these events. The only thing better than flying in a formation is flying WITH a formation. Just as he did the day before, Walt Fricke was there to help me out. He made it clear that he wanted to fly, and was happy to take me along. Since the NATA clinics tend to keep birds of a feather flying together, he was kind of an odd man out in his T-34. Taking me up would be a great way to get in some flying. He talked me into it.

I took this photo of Walt flying his sharp-looking T-34 at last year’s event.

Our first flight of the day was one of the very few dissimilar aircraft formations of the weekend. It consisted of two T-34s flown by Walt Fricke and Jim “Zack” Olzacki. and a pair of T-6s flown by Corey Franks and David Robinson. The flight lead was Corey Franks

#2 was flown by David Robinson

Flying within a formation is great, of course, but not as great as flying outside the formation. Walt was #3 on this flight, so typically Lead and #2 were to one side, and #4 was on the other. My view of Lead never changed, and #2 was the most variable. He could be at my 2 or 10 o’clock position if we were in an echelon, or at my 3 or 9 o’clock if we were in a fingertip formation. #4, Zack’s T-34 was typically in the position for the best photos (although sometimes awkward to photograph), as he was supposed to be at my 4 or 8 o’clock. It was a very smooth flight flown by four very proficient aviators.

Franks and Robinson are in a left echelon as they prepare for a right-hand break.

Lead pitches out to the right.

We were back on the ground by 12:30, and it was time for lunch. By 1:30, we were getting ready to brief for another flight. This one was expected to be a good one, with four experienced formation fliers going up for a “dust off” and Walt following along in his T-34 flying as a photo ship for me. Corey Franks was again flying Lead, and Tom Malone was flying in the #2 spot.

It was nice to finally meet Tom, as I believe I see his boldly-registered N36 at just about every show I go to!

David Robinson was #3 for this flight, and David Kahley in his Navy blue T-6 was in #4 position With 5 experienced pilots at the controls during this flight, it was, indeed, a smooth flight. Lead is in the break

Two’s in the break

And Three is in the break.

It was another excellent flight.

Finally, as the sunlight was getting a bit lower in the horizon, conditions were perfect for the last flight of the day. Again, Walt was flying the T-34 as the photo ship. This flight gave me a chance to photograph a few different planes. Lead was Kurt Holstein in his T-6 with the Gitmo Bay colors and a “KH” on the tail. (I wonder what that could stand for?)

Tom Malone was flying as #2, and Will Loving was in the sharp-looking Marines T-6

Bring up the rear was JP Mellor, an old Facebook friend whom I finally had a chance to spend a little time chatting with. That’s one nice thing about these events!

One advantage of flying with Walt is that he has a photographer’s eye. He knows what we are looking for, and also has the skill (and the power of a T-34) to get us into the right position for the “money shot”. We had the best formation photo shoot of the entire weekend. It helped not a little that once the four-ship got lined up just right, they were able to hold position as Walt yelled into the intercom, “Get it! Get it! Get it!” A good rejoin is a beautiful thing to watch, especially from the air!

Talk about a nice echelon turn…

A good landing is one you can walk away from. A GREAT landing is when you can use the plane again!